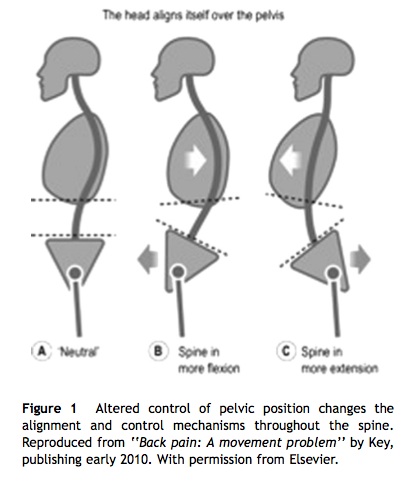 Key J. The pelvic crossed syndromes: a reflection of imbalanced function in the myofascial envelope; a further exploration of Janda's work. J Bodyw Mov Ther. 2010;14(3):299-301. Epub 2010 Mar 2014.
Pelvic crossed syndrome, as proposed by Janda, is imbalanced muscle activity leading to structural changes which may be the cause of pelvic pain.  Tightness and over activity of the hip flexors and low back extensors with co-existing under activity of abdominals and gluteals create a "crossed" pattern of disturbed sagittal lumbopelvic postural movement and control.

The adductor muscle group are vulnerable to shearing forces from unilateral loads and tremendous torque from the pelvis.  Gracilis, pectineus and adductor longus are most often injured/avulsed during forceful hyperabduction of the hip with hyperextension of the abdominals in a movement such as kicking.  This area is most vulnerable as demonstrated by Figure 3.  There are 3 sets of forces and counterforces acting on the pubic symphysis:
1) Anterior compartment (abdominals)
2) Posterior compartment (hamstrings and adductor magnus)
3) Medial compartment (gracilis, adductor longus, brevis, and obturator externus)
Any imbalance in one compartment can lead to tremendous torque at the pubic symphysis and its' muscle insertions are vulnerable to this torque.