Legg-Calve-Perthes disease is a childhood disorder, typically affecting children age 2 -12 years, and most common in boys between the ages of 4-10. In this condition the proximal epiphysis within the femoral head becomes partially or completely necrotic due to progressive ischemia and secondary death of osteocytes of the femoral head. This results in the collapsing of bone of the femoral head, increasing the potential for degenerative arthritis. The specific cause of this disease remains unknown. A similar condition that occurs in adults is known as avascular necrosis  or ischemic necrosis of the femoral head. 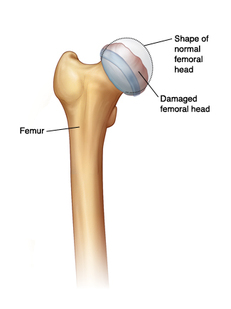